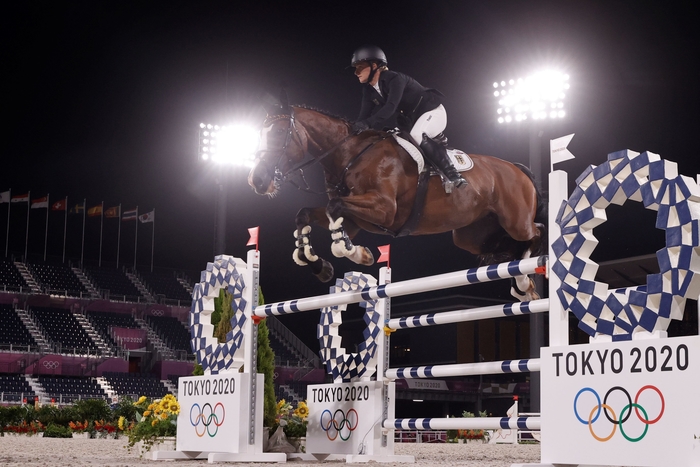 Britain’s Oliver Townend, Laura Collett and Tom McEwen were in a league of their own when cruising to Eventing team gold at the Tokyo 2020 Olympic Games at Baji Koen Equestrian Park tonight. This was their country’s fourth team title but it’s been a very long wait since Richard Meade, Mary Gordon-Watson, Bridget Parker and Mark Phillips stood top of the podium a full 49 years ago in Munich in 1972. Australia took the silver tonight, while the defending champions from France claimed the bronze.

And Germany’s Julia Krajewski has entered the equestrian history books as the very first female athlete to take the Individual Olympic Eventing title. When the Games last took place in Tokyo back in 1964 the USA’s Lana du Pont was the first woman to compete in the three-day event, so female firsts and the Tokyo Olympics seem to be intrinsically linked.

In the battle for the remaining Individual podium places it was Britain’s Tom McEwen who took the silver while Australia’s Andrew Hoy clinched the bronze. Hoy’s result is nothing short of sensational because the three-time team gold medallist has a staggering record of participation at eight Olympic Games dating all the way back to Los Angeles in 1984. He was only 25 years old back then, and today at the age of 62 he’s as competitive as ever.

Tom McEwen paved the path to Britain’s team victory with a superb round from Toledo de Kresker over the first of Santiago Varela’s beautifully decorated tracks tonight. And he was filled with confidence that his team-mates would do the rest of the work without difficulty.

A four-fence advantage and more after the previous day’s cross-country test had left his side sitting comfortably ahead, and as it turned out his confidence was not mis-placed.

“He was incredible”, he said of his 14-year-old horse, “I just put him on the spot and he was up and away. Everyone that follows Eventing knows he’s a great jumper so it’s just up to me on top”, he added.

However team-mate Laura Collett had a scary moment when London 52 baulked at the water tray at fence four and scattered poles everywhere before regaining his equilibrium. “He started like his normal self but just as I came around the corner the light shone on the water and he suddenly started to draw back and I was quite far off it and he just went up and paddled. I was lucky he’s such a great jumper and it didn’t faze him and he got it back together and finished really nicely. I’m gutted and it’s a shame but I think it could have been a whole lot worse! I just hope I haven’t put too much pressure on Oliver”, she said.

However it’s difficult to put too much pressure on Oliver Townend who was heading the Individual rankings going into today’s closing stages after a sensational run in both Dressage and Cross-Country with Ballaghmor Class. The first element of the double at fence nine, four fences from home, hit the floor but that still left Team GB finishing on a score of 86.30 and under no threat from their closest rivals.

The real battle was played out between Australia and France, Kevin McNab opening the Aussie account with a foot-perfect run with Don Quidam before Shane Rose’s Virgil also fell victim to the first element of fence nine. Meanwhile Nicolas Touzaint and Absolut Gold who were part of the gold medal winning French side at the Rio 2016 Games returned with just 0.4 for time, while second-line rider Karim Florent Laghouag faulted only at the first element of the triple combination at fence five.

The two sides had the started the day with a hair’s breadth between them, and even though Frenchman Christopher Six was clear and clean with Totem de Brecey, Andrew Hoy made no mistake with Vassily de Lassos to bag the silver when last to go, the two sides separated by just 1.3 penalties.

IOC Vice-President and Chair of the Coordination Commission for Tokyo 2020 John Coates was on hand to see Australia take team silver and offered his congratulations to the three team members.

The Individual finale was truly gripping as the top-25 slogged it out. Japan’s Kazuma Tomoto collected just 0.4 penalties when seventh-last to go with the lovely Vinci de la Vigne, and when France’s Christopher Six faulted at the last of the triple combination on the new course Tomoto began to move up the order.

Colletts’s bay gelding left the last two fences on the floor but when Hoy followed with a clear the top three had absolutely no breathing space. McEwen didn’t need any when executing yet another regal tour of the track but Townend’s luck ran out, his 4.8 penalties pushing him off the podium.

Last in, Krajewski could have been completely overwhelmed but held her nerve to deliver a fabulous round from the mare she calls Mandy. She would take the top step of the podium and her place in equestrian history, ahead of McEwen and Hoy in silver and bronze.

The 32-year-old rider who is based in Warendorf, Germany has had a really tough year, beginning with the passing of her father and then having to retire her top horse Samurai du Thot after he had his eye removed due to a lingering infection. The Tokyo 2020 Olympic Games seemed an impossible target after that, but when the young mare she calls Mandy won the CCI4* in Saumur, France and the pair took bronze at the German Championships in the spring, then suddenly the horizon was completely altered. And now she finds herself an Olympic champion.

“It’s the stuff that movies are made of, and yes I cried, because I was thinking of my family and my father and basically everyone who has been behind me. This is very much a fairytale finish for me!”, she said.

Silver medallist McEwen is 30 years of age and looks set on a long road of further success while Hoy was keen to declare that he’s not hanging up his boots anytime soon.

“When I started in the sport I was really proud of being the youngest person in the team and now its just an absolute joy that I’m still here and so healthy. When people meet me in the Olympic Village they say, you are an official are you? And they look a bit surprised when I say no, I’m an athlete!”

He has enjoyed these Games as much as any and was full of praise for the organisation. “Without doubt the Japanese people, the country of Japan and the city of Tokyo deserve the biggest gold medal for putting these Games on. The effort they’ve gone to is incredible, and it’s a privilege to be here”, he concluded.

Julia Krajewski GER: “I won my first Pony title 20 years ago and since then it’s been a roller-coaster really. It’s quite unreal.

Going in last tonight I wasn’t thinking about Olympic gold. I said we’re going to do a great round like jumping at home and that is all.

Oliver Townend GBR: Talking about winning team gold - “It’s very unreal and hasn’t sunk in yet but at same time we were three riders on exceptional horses and that’s what’s been so special. All three of us have been on horses of a lifetime and we knew that coming here we had a very good chance.

Looking back at whole week I feel relieved and very proud of the whole team, not just the people here, but the whole team at home, people who put in the hard graft every day - they deserve this as well.

Laura Collett GBR: Talking about winning team gold - “Being on the podium was a completely surreal experience. I’m a bit lost for words, just to be here at an Olympics is a dream come true let alone win a gold medal. It’s going to take a few days, weeks, months for this to actually sink in.

Andrew Hoy AUS: “We’ve got the most wonderful relationship, this horse and myself. He was so fresh he was having a little buck in the warm-up, it’s as if I did a dressage schooling exercise with him yesterday.

We got the horse on 13th May 2017, the day Steffi and I got married, so an easy day to remember. Got him from Tom Carlile and for me it’s an absolute joy to work with him every day, every day he puts a smile on my face.

Shane Rose AUS: “We’re all mates on this team so you ride everyone’s highs and lows with them, but we obviously think team first in Australia and how you perform individually affects your team-mates so you always want to give your best foot forward. So for me watching them do well is great, and if myself or them has a bad moment you feel that with them. In Eventing we don’t get team opportunities very often, I’m basedin Australia and these guys are based in Europe so we only get to see each other every few years and when we do come together it’s amazing how quickly we bond.

Karim Florent Laghouag FRA: “This team medal is very emotional. I miss having the public and would like to share this medal. All the team have received lots of messages and support and we are very grateful for the support and want to thank all the people that encouraged us. This medal belongs to them too!”