Home > News & Stories > Can the Swedes get a grip on that glorious Jumping gold….

Can the Swedes get a grip on that glorious Jumping gold…. 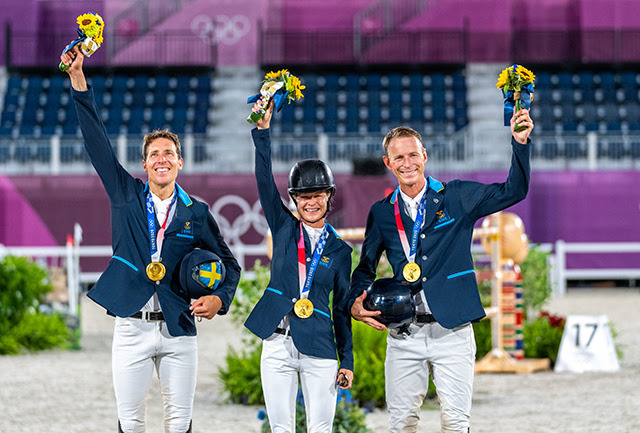 Less than two weeks ahead of the ECCO FEI World Championships 2022 the tension is rising and speculation is rife about the fate of Jumping gold. And possibly the biggest question is whether Team Sweden can follow through on their historic Olympic victory in Tokyo last summer.

The publication this week of definite entries for the Agria FEI Jumping World Championship shows that the same three riders and the same three horses who claimed the Team title for their country for the first time in 97 years are selected once again.

Henrik von Eckermann with King Edward, Malin Baryard-Johnson with H&M Indiana and Peder Fredricson with H&M All In - who also claimed individual silver - put Swedish showjumping right back onto centre stage with that success 12 months ago. And they are joined on their country’s five-strong side for the World Championship by Peder’s brother Jens Fredricson riding Markan Cosmopolit who finished third at the Longines FEI Jumping World Cup™ Final 2022 just three months ago and multiple Olympian Rolf-Göran Bengtsson with Ermindo W.

Together they make quite some team.

The big wins rarely come easy, and they had to battle it out in a thrilling jump-off against Team USA to clinch that Olympic gold, Fredricson settling it with his last-to-go ride that denied the Americans the title by the narrowest of margins.

It was the direct opposite of the result of the showdown between these same two nations at the FEI World Equestrian Games™ in Tryon, USA three years earlier where McLain Ward wrapped it up with his last-to-go ride on Clinta.

Ward is back in the US side in the battle for the 2022 world titles, this time riding the super-competitive Contagious, and is joined by Adrienne Sternlicht and Cristalline who were also members of that 2018 winning team. Completing the American selection are Lillie Keenan (Argan de Beliard), Brian Moggre (Balou du Reventon) and Ward’s Tokyo 2020 silver-medal-winning team-mate Jessica Springsteen (RMF Zecilie). There may be a score to settle here between the Americans and the Swedes…

However of the 22 teams in contention it is Belgium they may most have to fear. Peter Weinberg’s side had already settled comfortably into bronze medal position in Tokyo before the final battle for the other two medals began, and on current form Niels Bruynseels (Delux van T&L), Jérôme Guery (Quel Homme de Hus), Nicola Philippaerts (Katanga v/h Dingeshof), Jos Verlooy (Igor) and Gregory Wathelet (Nevados S) could prove tough nuts to crack.

When it comes to experience however perhaps the man with the most this time around is Great Britain’s John Whitaker. He won the first of four World Championship team medals in Dublin (IRL) in 1982 and individual silver with the great Milton at Stockholm (SWE) in 1990. Riding Equine America Unick du Francport he is listed alongside London Olympic gold medallist Scott Brash (Hello Jefferson), Harry Charles (Romeo 88), Joseph Stockdale (Equine America Cacharel) and the partnership that claimed individual Jumping gold in Tokyo, Ben Maher and Explosion W.

and with the reigning European champions Andre Thieme and DSP Chakaria in their side along with Christian Ahlmann (Dominator 2000 Z), Marcus Ehning (Stargold), Janne Friederike Meyer-Zimmermann (Messi van’t Ruytershof) and Jana Wargers (Limbridge) they are, as always, a serious force to be reckoned with.

Thieme pipped Switzerland’s Martin Fuchs for that European individual title last September where Sweden’s Peder Fredricson took individual bronze, and these three will again be vying for individual glory when the action gets underway in Denmark in 10 days time.

The Swiss claimed the 2021 European team title, and with Fuchs and Steve Guerdat who earned individual silver and bronze at the FEI World Equestrian Games™ 2018 lining out with Edouard Schmitz, Pius Schwizer and Elin Ott then Team Switzerland looks bound to feature prominently. Fuchs in particular has been like an unstoppable train in recent times, filling number 1 spot in the world rankings for months and adding the Longines FEI Jumping World Cup™ 2022 title to his long list of recent successes last April.

Of course in the sport of Jumping you never know exactly what is coming down the line and surprises are the order of the day. Nothing is for sure, except that the Agria FEI Jumping World Championship should provide a gripping week of top sport. So don’t miss a hoofbeat…

While the Individual title has been up for grabs since the inaugural Championships in Paris (FRA) in 1953 where Spain’s Francico Goyoago came out on top, the team Championship was only established in 1978 in Aachen (GER) where the British side of Derek Ricketts, Caroline Bradley, Malcolm Pyrah and David Broome pinned The Netherlands and USA into silver and bronze.

There have only been 11 World Championship Team contests, and the countries with the greatest success have been Germany and France with three wins each.

When it comes to individual glory Germany stands head-and-shoulders above all the rest with seven victories from 19 editions, beginning with the legendary partnership of Hans Gunther Winkler and Halla in 1954 and concluding with Simone Blum and DSP Alice in 2018.