The next generation do themselves proud…

The Viking raiders from Denmark claimed all before them in Dressage, Team Great Britain swamped all-comers in Eventing and Irish eyes were smiling when they claimed all gold in Jumping at the FEI European Pony Championships 2019 staged in the Hippodrome at Morawa in Strzegom, Poland.

A total of 153 riders aged between 12 and 16 years and representing 18 countries competed over five days of fast and furious action that began on 14 August and concluded today (18 August). 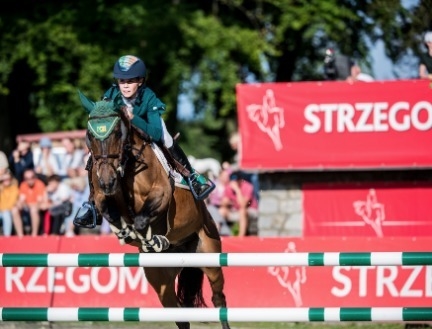 The Danes were first to stand on the top step of the podium when taking Dressage team gold on Thursday. Their final scoreline of 226.829 gave Alexander Yde Helgstrand (Adriano B), Liva Addy Guldager Nielsen (D’Artagnan), Nathalie Thomassen (Lykkehoejs Dream of Dornik) and Thilde Rude Hare (Morgensterns Dakar) a narrow advantage over the Dutch side of Micky Schelstraete (Elin’s Noncisdador), Floor van der Kuijl (Champ of Daily), Robin Heiden (Colourfull Cannonball) and Evi van Rooij (King Stayerhof’s Jango) who had to settle for the silver on 25.771.

Bronze went to Team Germany’s Shona Benner (Der Kleine Sunnyboy We), Lana-Pinou Baumburtel (Zinq Massimiliano FH), Antonia Busch-Kuffner (Daily Pleasure) and Rose Oatley (Daddy Moon). And such was the pure quality of the performances on all of the medal-winning teams that only 1.914 penalty points separated the gold medallists from their rivals in bronze who totalled 224.915.

Helgstrand made it a triple celebration when going on to take both the Individual and Freestyle titles. In both cases it was team-mate Nielsen who finished in silver medal position ahead of Germany’s Benner in bronze.

This was the perfect finale to Helgstrand’s pony career, as the talented young man who turns 16 in November is ready to move onto horses next year. His father is double-Olympian Andreas Helgstrand who took team bronze at the Beijing Games in Hong Kong in 2008 and individual silver at the FEI World Equestrian Games in Aachen (GER) in 2015, and his mother Marianne is also a highly competitive rider so Alexander has Dressage in his genes.

The Individual class was run over two days, and he had an anxious wait before the first of his two individual victories was confirmed. “It was really exciting until the last moment, and after last rider I was so happy, so it’s incredible! Adriano B is super sweet, he is a nice and relaxed pony, but when he is on a track at the show he is fighting!”, the new individual champion explained. And then the pair went on to do it again, posting a magnificent 82.140 to win the Freestyle in fine style.

In Eventing the British took command in the Dressage phase and didn’t let go, pinning France into silver medal spot while Ireland claimed team bronze. And Team GBR very nearly filled all three steps of the individual podium too, with Finn Healy (Midnight Dancer) taking the gold ahead of Ibbie Watson (Bookhamlodge Pennylane), while Freya Partridge (Master Macky) lined up in fourth.

However it looked as though it was their team-mate Daisy Bathe (SF Detroit) who was destined for the Individual honours when she went into today’s showjumping phase with nothing to add to her fantastic Dressage score of 26.8. But the track proved testing all morning, and when she had a stop late on the course and then a fence down, the addition of 10.28 penalty points saw her drop to seventh in the final analysis.

Bronze went to Italy’s Camilla Luciani (Camelot Damgaard) who moved up from seventh after Dressage to third after a brilliant cross-country run, and whose single showjumping error still left her secure on the third step of the podium and well clear of fourth-place Partridge.

The final British team score was 101.8, so they had a significant winning margin over the French side of Lisa Gualtieri (O Ma Doue Kersidal), Louise Petitjean (Versailled des Morins), Jonas de Vericourt (Vidock de Berder) and Lilou Ducastaing (Winnetou) who completed with 120.1 on the board. Ireland’s Grace Tyrell (Fiona’s Fionn), Alex Connors (Millridge Buachaill Bui), Brian Kuehnle (Tullibards Sixth Sense) and Tiggy Hancock (Coppenagh Spring Sparrow) moved up from fourth to third after good cross-country performances and stayed there when completing on a tally of 131.6.

Reflecting on a brilliant result for himself and his team, newly-crowned individual champion, Britain’s Finn Healy, said “it was a testing cross-country track yesterday, very technical, it required some reactive riding, but we all did that and got ourselves into the position to win. It hasn’t really sunk in yet - it’s a dream come true!”

The Jumping team Championship was a real thriller, with two separate jump-offs to decide both gold and bronze.

France and Germany, each carrying 12 faults, contested third place and it was the French foursome of Jeanne Hirel (Armene du Costilg), Ilona Mezzadri (Callas Rezidal Z), Pauline Scalabre (Sligo de Mormal) and Romane Orhant (Quabar des Monceaux) who squeezed their German opponents off the podium. Both sides added four faults to their scorelines but the French were considerably faster, posting 136.75 while Germany returned in the combined time of 148.32 seconds.

Tied on a two-round total of four faults, and with gold hanging in the balance, both teams produced three more clear rounds and it was Max Wachman’s breath-taking last-to-go run that swung it in Ireland’s favour. Breaking the beam in 40.22 seconds he rounded their total to 129 seconds which left Ireland just 1.72 seconds quicker than Britain in silver medal spot.

And then Max Wachman made it double-gold today when the grandson of world-famous thoroughbred horse producers John and Sue Magnier from Coolmore Stud in County Tipperary was the only rider to complete all five Championship rounds on a zero score.

It took yet another jump-off, this time between Great Britain’s Holly Truelove and Italy’s Ilona Mezzadri to decide Jumping silver and bronze, and, first to go, Truelove came off best when Mezzadri left two on the floor.