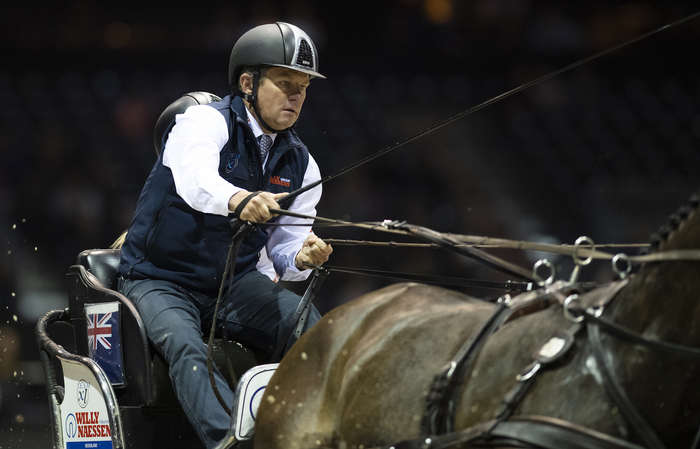 Koos de Ronde of the Netherlands, who won the championship in 2013, took second place in a repeat of 2019, having led the field of seven finalists after Day 1 in the Parc des Expositions.

Joining Exell and de Ronde on the podium was three-time World Cup and 27-time Dutch champion Ijsbrand Chardon, also of the Netherlands, who pulled from sixth place overnight to finish in the top three. Defending champion Bram Chardon, son of Ijsbrand, had to settle for fourth place after time penalties on both days of competition put him out of the drive off.

Dutch designer Johan Jacobs set a daunting course that included two sets of marathon obstacles, as well as a bridge and a tight speed box...

Heading into Day 2 of the Finals, scores from the previous day were converted to penalty points and carried over, meaning Driving teams would have to overcome any time faults to advance to the drive off for a chance at the title.

Only two teams went clear on Saturday: József Dobrovitz of Hungary, who was third on the leaderboard, and Koos de Ronde, who entered Day 2 on zero penalty points in first place. In between them was eight-time champion Boyd Exell, eager to regain his title and well poised to do so.

There were some shakeups, however, after the first round. Nine-time Hungarian champion Dobrovitz, his wife Monika and son József Jr. as his team, dropped back to fifth position.

Defending champion Bram Chardon, the youngest ever to hold the title in an upset victory last year, came into Day 2 in fourth place and couldn’t manage to move up from there, with 4 penalty points for balls down on Sunday to add to his 5.58 seconds carried over from Saturday, giving him a total of 157.19 on his run of 153.19 seconds.

The elder Chardon, Ijsbrand, had luck with him on Sunday. Even though he carried over 6.53 penalty seconds and picked up another 12 points on Day 2, his lightning-fast time of 143.97 made for a total score of 155.97, catapulting him into the drive off.

At the end of the first round on Sunday, behind Bram Chardon and Dobrovitz in fourth and fifth, Benjamin Aillaud of France, driving on a wildcard, finished sixth. Glenn Geerts of Belgium finished in seventh.

It was Ijsbrand Chardon, Koos de Ronde, and hungry Boyd Exell, who turned in a blistering clear time of 141.12 seconds, into the drive off on a slightly faster course.

Up first, Chardon had the crowd whipped to a frenzy with a clear round in 119.10 seconds for a total of 275.07 for the day. His team of Martijn Wagner and Chris van Rooij looked happy. But would it be enough to stand atop the podium?

De Ronde’s lead standing after Day 1 held him in good stead. With his wife Marie and son Pieter on the back of the carriage, he entered the drive off full of confidence. Even with 4 points and a slower time of 123.69, his total score was 272.88, moving him ahead of Chardon.

It all came down to Boyd Exell, who lost his title in the 2019 Finals after a disastrous miscommunication with his horse team.

The stands were packed for two days in a row

The crowd fell silent until the bell rang for Exell’s ultimate round...

Exell's navigator Emma Olsen and backstepper Hugh Scott-Barrett hung perilously off the back of the rig to shave microseconds off their time.

Their risks paid off, as the four-horse team of Bajnok, Barny, Rocket, and Demi, who was retired later that day at a miraculous 23 years old, crossed the Longines beam in only 119.81 seconds. With no penalties, that gave the Australian champ a total of 260.93 and the FEI Driving World Cup™ title once again.

Said Exell of his amazing win, “I think a bit more pressure on this one because I’ve got the fastest team in the world, but last year we had the big mistake. We said, listen, we know we’re at least 4 to 5, maybe 6, seconds faster than Koos. I need to drive clear, and I need to drive fast. Even if I have a ball, then I’ve still got a fast time.”

The strategy worked, in what was an emotional victory for Exell, with his daughter in hospital recovering from an accident. “I tried to do it for her--especially for her and my wife,” he added tearfully before the prize giving, where he remained ever the humble champion giving credit to his Driving team and incredible horses.

The FEI has crowned yet another king in FEI Driving World Cup™ action, this year in its 19th season, but there’s more excitement to come, with both Dressage and Jumping still to decide their championships at Las Vegas in April.