Opportunity can come knocking. For 16-year-old Queensland eventing rider India Cochrane, it came from long-time coach Garry Lung who chose India to train and compete on his much loved and well-performed Grand Prix Superstar GB Winchester. And compete they did. At the recent 2020 Brisbane CDN, this ‘new’ combination took out the Overall Junior Championship. Horse Deals spoke to Gary and India to learn about their journey so far...

Gary, together you and Chester have been a successful combination. What are your career highlights? There are loads of career highlights for Chester and I, but two stand out for me; Chester scoring a perfect 10 for his walk at Dressage With The Stars when we competed there when he was a five-year-old in 2008, and winning the Inter II, Grand Prix, Grand Prix Special and Grand Prix Freestyle at The Brisbane CDI 2018 (ten years later).

What made you pass on the ride to a junior? I love the idea of our educated and experienced horses having a second life to teach the next generation. I retired competing Chester at his prime age of 16 years old because I achieved what I had set out to do and I felt and he had lots left to partner and work with someone like India.

And your criteria in a junior for Chester? I want someone who has empathy, passion and feel, someone who is hardworking and committed and this is definitely the case with India. I started teaching her when she was eight years old and I remember back then that this young rider had all the above qualities. Over the years, she turned up without fail each week for her lesson, working tirelessly towards improving herself and her horse, taking direction and dealing with all the challenges that come with training and competing her horses. Not once did I ever hear her complain and I am so glad to have witnessed India not only grow into a lovely young lady, but someone who loves her horses, her friends and her family. When I first approached India and her parents to offer the ride to her, she was overwhelmed and excited at the prospect, but she showed her maturity by taking some time to think seriously and work through the logistics. She wanted to make sure she could commit to her school, commit to riding her eventing horse and commit to her family and friends. This time, I was overwhelmed. Anyone else who was offered an opportunity like this would “jump” in without any hesitation, but not India. 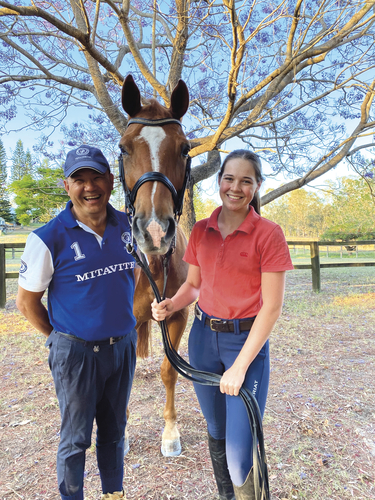 Did you see India’s eventing background as a positive or negative attribute towards establishing the new partnership? There are lots of positives and they are her dedication to training (eventing horses have to be fit and need to be worked regularly), her acceptance of the highs and lows of training and competing, and her drive to finish something she started regardless of how she feels. Eventers are resilient and tough and finishing all three phases safely is high on their priority.

What work has been involved in bringing the new partnership together? India first had to learn how to find the buttons. There were lots of times where Chester would take over and click into “canter pirouette”, “one-time sequence changes” or “piaffing” mode. Once she worked it out, she then had to learn how to put all the movements together. We first had Chester downgraded and this gave them both time to develop a partnership at a level where the pressure wasn’t there to perform all the FEI movements. Prior to this, India had only ridden novice level. I then set a competition plan for India to experience how Chester reacts when he goes out to competition and how he copes with certain conditions, for India to feel the pressures of riding at a new level and the idea that she is riding a horse like Chester and for her to learn to “test” ride. Each competition was so valuable and the lessons learnt have helped both of them. 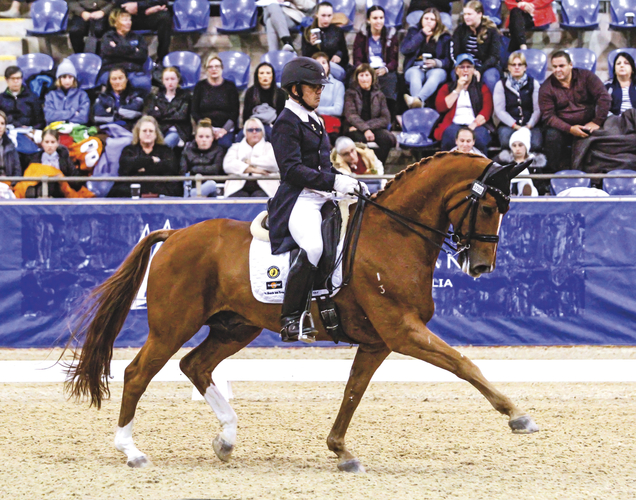 And we hear Chester is also enjoying a little bit of farmlife? Chester still lives with me at “Windhill” and India comes each day to ride him. She still has her weekly lesson, but this time it’s with Chester, and every now and then with Baloo (her eventer). While I’m teaching my other students and India is riding in the arena, I can glance across and keep an eye on them both. It’s like having that extra pair of eyes on the ground, something that we in Australia, should do more of. In Europe and USA, riders ride under the watchful eyes of their coaches or trainers or they ride with each other to assist and support each other. There have been times where India takes Chester home, where she takes him out for long trail rides around her parent’s property, through creeks and gully’s and the odd gallop across the open paddocks. It’s great for Chester to let his hair down and this has helped the partnership form.

How did you feel when India, riding Chester, was recently awarded Overall Junior Champion at Brisbane CDN? Like a proud parent (either a soccer dad or dance mum). India worked so hard and it was so nice to see it paid off.

As a coach, what value do you place on students learning from a schoolmaster? As I mentioned previously, I love to see all our educated and experienced schoolmasters given the opportunity to work with less experienced riders. I often hear parents and riders say they like their children or themselves to learn and grow with the horse, starting from the young and coming up through the levels, but I 100% disagree. Learning how to set up and which buttons to push and then feeling how the movements feel will fast track the learning process. Less experienced riders and green horses are challenging. 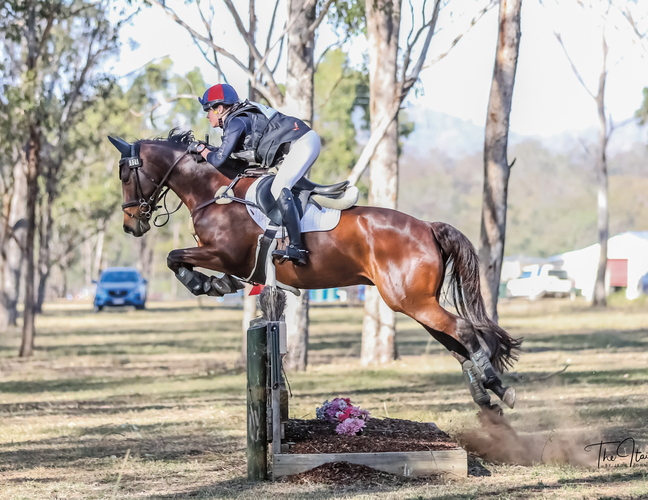 India and her eventer Baloo out on cross country. Photo: Jedd Johnstone - The J’Taime.

India, what is your riding history? I have been riding since I can remember. I started at Kurrajong Pony Club in NSW when I was three and began competing at open eventing competitions when I was eight. Horses have been a big part of my family’s life with my two older sisters also eventing and my older brother and Dad having played polo. Mum was the glue that held it all together. She ensured we all had regular dressage lessons so we were equipped with the fundamentals.

My first dressage instructor was Vicki Lymbery (Brydon), who firmly but kindly instilled my dressage foundations. After the pony stage, I have always had green horses that I have brought up the eventing levels, including my beautiful homebred, six-year-old Stock Horse, Thoroughbred, Connemara-cross gelding Baloo. We purpose bred him for polo, but he has demonstrated his true talent in the eventing world. I currently compete Baloo at 1* (105cm) eventing.

How and when did Gary and Chester come into your life? When I was nine, my family moved back to Queensland. My mum approached Gary about coaching my sister, Eliza, and me to help with our dressage in eventing. Back then Gary had not taught many kids so Mum really had to twist his arm to take us on! I’ve had weekly lessons with Gary ever since at Windhill Dressage at North MacLean about 10 minutes from home. Chester was always the magnificent and untouchable horse in the stable. Gary used to tell me if I worked hard enough, one day he would let me have a ride on Chester as a reward. Despite asking regularly, the opportunity never came until Gary surprised me when I was 13. My dream came true! However, that ended in somewhat of a disaster as Chester didn’t take kindly to a young rider who was pushing all the wrong buttons - Gary thought it was hilarious!

What were your initial thoughts when Gary selected you as Chester’s rider? During my regular weekly lesson about 12 months ago, Gary started asking leading questions that, in hindsight, I was answering all incorrectly! Such as, “would you ever consider doing straight dressage?” I replied, “no, I like jumping too much!” Then he said, “what about if you had a fancy dressage horse?” To which I replied, “no, I don’t think so. Mum and Dad would never buy me one.” Gary sounded slightly deflated as he said, “well, that’s a shame because I was going to offer you the ride on Chester.” I burst into tears as I was overwhelmed by his generous offer. I was so honoured and humbled that he would choose me. I am extremely grateful for the opportunity Gary has given me with Chester. 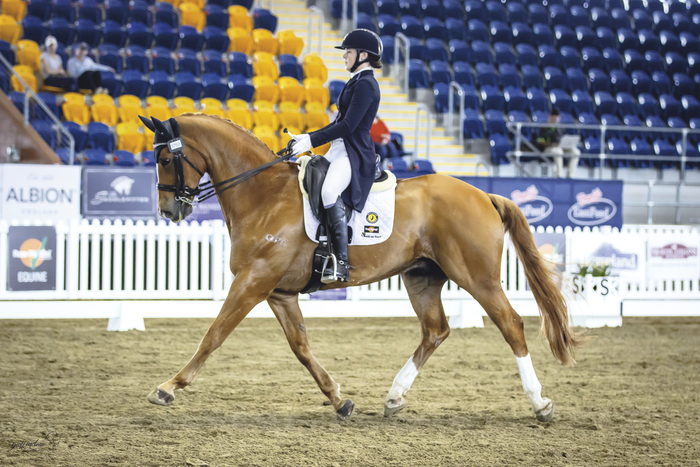 India and GB Winchester in the arena at the Brisbane CDN.

How have you adjusted from eventing to now also competing in straight dressage? I have to juggle more competitions into my schedule, which is intensifying as I enter my final year of high school. I have been lucky as there have not been many clashes. I have managed to attend most of my eventing competitions whilst still fulfilling all of my dressage commitments, along with my Somerville House interschool equestrian representation.

What have you enjoyed about learning from a schoolmaster? Chester has given me a whole new respect for horses. He has such a strong, human-like personality. In my eventing, I have always had to be the teacher with my green horses under the eye of my eventing coach, Charlotte Price. Now the roles have been reversed as Chester is teaching. He is the first to let Gary know if I am not riding correctly during a lesson! He has taught me that the smallest body movements and timing of aids can make the biggest difference. Also, at competitions, a more exuberant Chester comes alive. If I stop riding, Chester takes over and throws in some Grand Prix movements! He feels amazing, but I am still learning to harness that energy.

How has your eventing dressage improved since you’ve been refining your skills with Chester? My dressage competition and ring-craft have definitely improved in eventing. However, riding Chester has also helped me improve my position, balance and aids in showjumping and cross country phases. Initially, I was having trouble switching from a schoolmaster to a young horse, as they have to be ridden so differently. Poor Baloo was becoming confused, but I have since learnt to consciously be aware of which horse I am riding and adjust to their level of ability.

What has Chester taught you so far? Chester has taken me from a novice dressage rider to a rider now with a new appreciation for the preparation and skill required to execute a high-level test. Not only has he improved my riding, Chester has taught me so much as a person; patience, resilience and humility. He continues to offer me more and more every ride.

Could we see you move from eventing to dressage permanently? No... I love the adrenalin surge of galloping on cross country too much! Eventing has also been more than just riding for me. While the dressage community has been very welcoming and supportive, my eventing family means a lot to me. I have made so many lifelong friends through the sport that I could never see myself leaving it.

What are your future plans with Chester? To continue to learn and go up the levels in dressage for as long as Chester and Gary are willing to put up with me. My ultimate goal is to compete in the under 25 Grand Prix, but we will see! 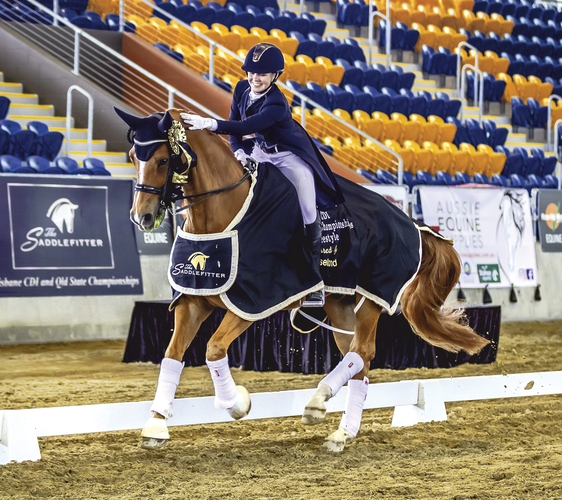