Old rivals slog it out in thrilling two-way jump-off 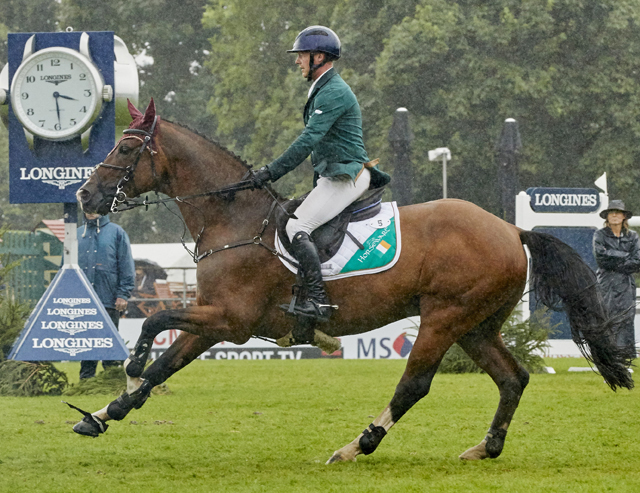 Ireland won out in a two-way jump-off against old rivals Great Britain in the Longines FEI Jumping Nations Cup™ of Great Britain at Hickstead today. Wild winds, and the first heavy rain to hit the region for more than 50 days, ensured conditions were seriously challenging in this penultimate qualifier of the Europe Division 1 series. But Rodrigo Pessoa’s side of Trevor Breen (39), Richie Moloney (36), Michael Duffy (23) and Anthony Condon (31) battled through, and Condon clinched it in a third-round showdown against Holly Smith.

It was no day for the faint-hearted as the formidable Hickstead fences took their toll. The tall white gate at fence three was a real bogey, as was the 4-metre-wide open water which sealed the fate of the 2017 series champions from The Netherlands who retired in the closing stages. Only two weeks ago Johnny Pals and Chat Botte du Ruisseau Z were the Dutch heroes when pinning the Irish into runner-up spot at Falsterbo (SWE) in a four-way jump-off against the clock. But today the lovely 10-year-old stallion found the Hickstead water very scary in both rounds, and, down to a three-man side following the withdrawal of Willem Greve’s Zypria S, the pair’s second-round tally of 23 faults was so expensive that Chef d’Equipe, Rob Ehrens, decided his team should call it a day.

But the British were also reduced to just three counting scores when former world no. 1 and 2012 Olympic gold medallist Scott Brash was eliminated at the open water both times out with Hello Shelby. Team manager Di Lampard has tremendous talent at her disposal however, and Smith (Heart’s Destiny), Amanda Derbyshire (Luibanta BH) and William Whitaker (Utamaro D’Ecaussines) showed true grit to force the jump-off against the boys in green.

Smith set the target with a lovely clear round from her big, quality, nine-year-old bay who broke the beam in 43.39 seconds. Condon, who has been based in England for the last 14 years, knew what he had to do when it came to his turn. “Holly is a very fast rider and her horse has a huge stride so she can be deceptive - I just thought that if I could do the same and be a little quicker then I could catch her” he said. Steering his 12-year-old stallion SFS Aristio, which is owned by John and Pat Hales and their daughter Lisa whose names will always be intrinsically linked with the super-stallion Arko and rider Nick Skelton, he broke the beam more than two seconds sooner. As he raced through the finish his fellow-countrymen Duffy (EFS Top Contender), Breen (Bombay) and Moloney (Freestyle de Muze), and the entire Irish contingent, exploded with delight.

Ireland has now rocketed up to third on the Europe Division 1 leaderboard and, with 335 points, the reigning European champions look well-qualified for the Longines 2018 Final in Barcelona (ESP) in October. Brazil finished third today, Sweden fourth and the Belgians, long-time Europe Division 1 leaders, had to settle for fifth ahead of Italy who lined up sixth of the seven competing nations.

And the Irish have another big day to look forward to when the Europe Division 1 series concludes on home ground in Dublin (IRL) in 12 days time where Britain and Italy will be desperate to move out of the danger-zone at the bottom of the league table, as only seven of the 10 competing nations will make the cut to the Barcelona Final.