Madden is magnificent with another Longines victory in New York 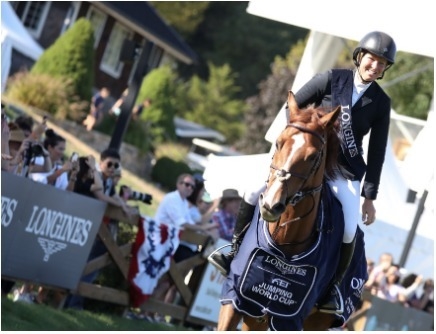 Twice a Longines FEI Jumping World Cup™ Final Champion, Elizabeth “Beezie” Madden (USA) has ridden some exceptional horses, but even she admitted that her expectations were exceeded when 8-year-old Garant jumped her to another Longines victory in New York (USA).

Madden and the chestnut gelding topped a jump-off field of six to win the $210,000 Longines FEI Jumping World Cup™ New York, the first east coast qualifier of the 2019/2020 North American League season. Using her mount’s footspeed and athleticism to her advantage, Madden crossed the timers of Alan Wade’s (IRL) shortened track in 40.89 seconds. Last to jump, Karl Cook (USA) and Caillou finished second on a time of 41.25 seconds, while Katie Dinan (USA) completed an American sweep of the podium with Brego R’n B. The only other double-clear performance, they finished in 41.94 seconds.

“He’s a young horse,” Madden said. “The plan was to step him up this fall. He jumped on Friday, and he went so well, we decided to go [today]. I wasn’t even sure I was doing class this week when came here. For Him to come through like that today is amazing.”

Seven combinations produced a clear first round, but Nicole Shahinian-Simpson (USA) elected not to return for the jump-off with Akuna Mattata, leaving a field of six. Dinan was the first to add a second clear to her scorecard, before Madden shaved more than a second off her time. The two-time Olympic gold medalist simply could not be caught.

“He has tremendous jumping talent, which as we all know, is not everything,” Madden said. “I also think he’s incredibly smart. He knows he’s not supposed to hit the fences! He then proceeds to know how to run fast and jump high, and I have no idea why!”