The host nation turned on the magic once again to win the Longines FEI Jumping Nations Cup™ of Mexico 2019 at Coapexpan today with a gutsy and determined performance. The Mexican side of Patricio Pasquel (47), Manuel Gonzalez Dufrane (25), Lorenza O’Farrill (49) and Salvador Onate (41) produced a spectacular result, confirming their supremacy without having to call up anchorman Onate in the second round and pinning USA into runner-up spot while Canada finished third.

O’Farrill was hailed the hero of the day, her second-round clear with the 14-year-old gelding Queens Darling wrapping it all up nicely. But it wasn’t just the second consecutive Mexican success in the three-leg 2019 North and Central America and Caribbean League that she and her team-mates were celebrating this evening, it was O’Farrill’s sensational return to the top end of the sport against all the odds.

“I’m out of myself with proudness and emotion!” said the lady who suffered a life-altering back injury when kicked by a horse leaving a prize-giving ceremony seven years ago. Her condition deteriorated to the point where she couldn’t walk, but after a series of surgeries, and now sporting six screws in her spine, the athlete who lined out at the FEI World Equestrian Games in Rome (ITA) in 1998 has now bounced back to her very best. 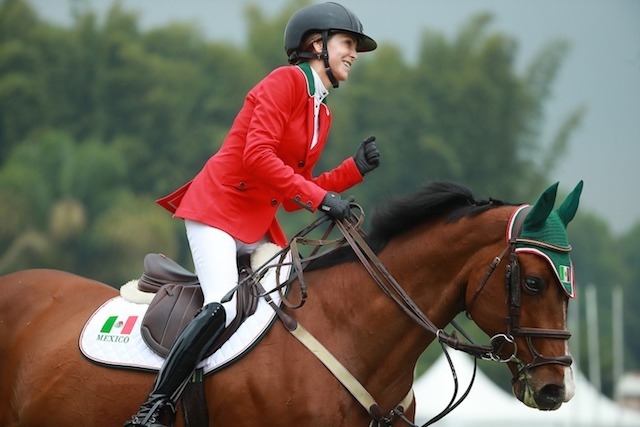 America’s Richard Spooner was foot-perfect both times out with his 10-year-old grey, Quirado RC, but the man whose nickname is “The Master of Faster” picked up a time fault in each round. Eve Jobs, at 21 the youngest competitor on the day, kicked out only the narrow vertical at fence six in the first round before returning to put in a copybook clear with Venue d’Fees des Hazelles. Nicole Shahinian-Simpson’s feisty mare, Akuna Mattata, fell foul of the bogey oxer at fence nine that caught out so many in the first round and added five more in the second round and this brought the US total to 15 faults.

When O’Farrill followed Pasquel’s second-round clear with Babel, and another four-fault result for Gonzalez Dufrane and his sweet mare Hortensia van de Leeuwerk, with a superb clean run the game was up.

The Canadians made a great recovery with second-round clears from Lisa Carlsen (Parette) and Nicole Walker (Falco van Spieveld) but it was too late as they completed on 22 faults. Alex Granato and Carlchen W rounded up the US effort with a 12-fault result but the Mexicans were already home and hosed with their team total of 13, so Onate, who had racked up an uncharacteristic 12 faults first time out with Big Red, didn’t need to run again when listed last to go.

O’Farrill said today that her comeback hasn’t been easy. “I had to work on myself inside and out with physical therapy and mental training, but it’s been worth every minute!”

Her husband bought Queen’s Darling as an 8-year-old but they had a couple of falls so his wife took him over and began to enjoy some success. When she was going into surgery her husband promised that Queens Darling would be waiting for her when she was better and since she returned to the saddle she’s been working on the horse’s spooky nature - “I can’t change him so I use it to my advantage!” said the rider whose steeds are naturally supremely fit because they live 3,000 meters above sea level in Mexico City and whose other ride, the mare Calvira, won Friday’s Longines Grand Prix.

O’Farrill is now looking forward to the third and last leg which will take place in Langley (CAN) in a few weeks time where the result of the North and Central American and Caribbean League series will be decided. In the lead with 200 points on the board following their double of victories in Wellington (USA) in February and again today, Team Mexico hold the lead followed by USA on 170 and Canada with a total of 140 points.