France had to wait until the seventh 4* or 5* Grand Prix of this extraordinary season of the HUBSIDE JUMPING to notch up a victory. Nicolas Delmotte and Ilex VP were the winners, ahead of Normandy’s Titouan Schumacher, and of the Italian rider used to being placed here in Grimaud, Emanuele Gaudiano.

A really enjoyable Grand Prix! During the first round of the big class of the day, for a long time only two riders had qualified for the jump-off. That was without counting on the second half of the first round, and a brilliant group of riders, who in the end, increased that number to seven (of the thirty- six riders competing) and rode in a very exciting jump-off! 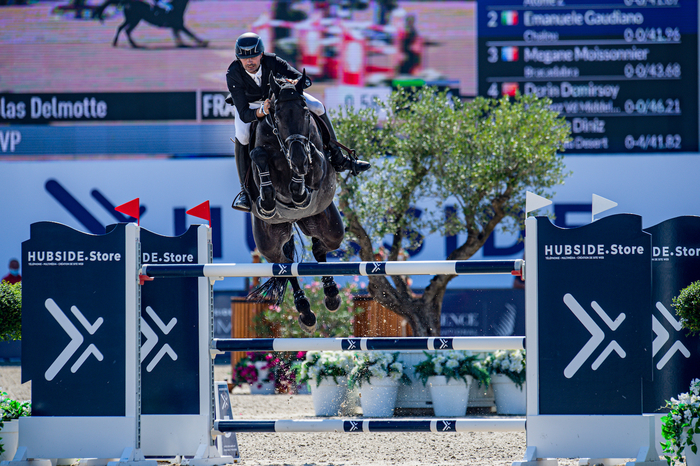 Turkey’s Derin Demirsoy was first to go in this jump-off with Koblenz vd Middelstede, and jumped double clear...in a time which nevertheless seemed “beatable”. Earlier in the week, the rider, who is based in the Netherlands and was the 2011 European Junior silver medallist, already won a CSI 4* 1.45m class. Mégane Moissonnier, the young lady rider from Rhone-Alpes, who was already the winner of a CSI 2* class this week, shined with her self-control with Bracadabra! She lowered the previous time by almost three seconds, had no rails down and so was also double clear. After her, Italy’s Emanuele Guadiano and Chalou with his unique style, continued to smash the time to beat! The jump-off of the HUBSIDE JUMPING’s seventh 4* or 5* Grand Prix was well on its way to being thrilling.

France’s Titouan Schumacher, a loyal rider at the HUBSIDE JUMPING, was already very fast in the first round with Atome Z and continued in this exciting race to improve on the time to beat! Bingo! He jumped a perfect round, and even went as far as shaving three tenths of a second off the Italian’s incredibly fast time. After him, Luciana Diniz with Vertigo du Desert, wasn’t just going through the motions on the French Riviera...The Portuguese rider came dangerously, very dangerously close to Schumacher’s time...but had one pole down on the final fence.

At this stage of the class, the victory could only be for France or Brazil. With eight jumping faults, Brazil’s Pedro Veniss with Boeckmanns Lord Pezi Junior, were out of the running. Three cheers for France: this Grand Prix would well and truly be won by a French rider, either Titouan Schumacher or Nicolas Delmotte, last to go. The rider from France’s Nord department set off at a crazy pace with his loyal Ilex VP and jumped perfectly. And knocked off nine hundredths of a second off his fellow countryman’s time! The Delmotte/Ilex combination were winners again on the French Riviera. Their last victory in a 4* or 5* Grand Prix dates back to Dinard, in July 2017.

Nicolas Delmotte (FRA): : “It was a really great Grand Prix. The first round’s track was really interesting. I was last to go in the jump-off, which is said to be a good position. But I saw that the riders that jumped clear were going faster and faster as the jump-off progressed, and that it was getting harder and harder to improve on the time to beat. I had to pull out all the stops but I honestly didn’t think that I could beat Titouan. There were already five riders who had jumped double clear, so I had to take all the risks. And so I was already taking risks on the first fence! I chose to ride the long distance at the start of the round in 8 long strides and then everything went well afterwards. I felt that my horse was really in great shape, which made me feel confident. I took all the risks until the last line, as Titouan had already had a wonderful jump-off. As did Mégane Moissonnier and Emanuele Gaudiano. Ilex has proved he’s reliable once again. He’s back in fine form after being out last year for eight months. This summer, he took part in national classes, including those on the Grand National circuit, which I really like for preparing horses coming up through the ranks for high- level competition. He was second in Saint-Lô and third in Le Touquet. Next week, Urvose du Roch should be competing in Grimaud’s CSI 5 Grand Prix. The HUBSIDE JUMPING is an extraordinary opportunity for us as riders: we’ll never be able to thank Sadri Fegaier enough for giving us the possibility to do our sport at high-level.”