The 2019/2020 season of the FEI Driving World Cup™ has begun. The very best drivers got together at Longines Equita Lyon, Concours Hippique International for this first four-horse indoor driving meeting. At the end of a drive-off reserved for the three best teams from the first round, Boyd Exell - the world number one and a true legend in the discipline - won the event with a masterful performance. The Australian combined speed and precision in this spectacular class. He won the event in a time of 142''70, with second place going to the young and promising Dutchman Bram Chardon (26) - who won the FEI World Cup Driving Final last year - in a time of 148''99. Third place went to the Hungarian József Dobrovitz in 173''14. 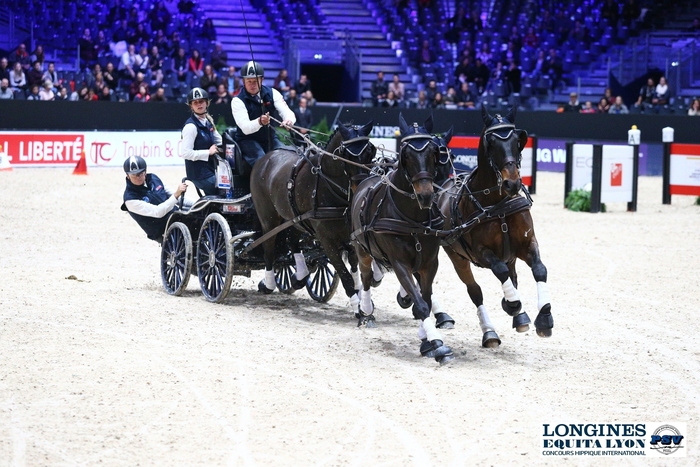 Leading their four horses with their guiding reins and the sound of their voices, the drivers demonstrated the full potential of their horses and the true teamwork achieved with their grooms. "We had a great day of sport. I competed for a long time against Ijsbrand Chardon. Today, it is his son Bram who has taken over. He is a great competitor and improving each year. It's great for our discipline: it pushes everyone to get better and it will take elite driving to a new level," said Boyd Exell, four-time world champion and seven-time FEI World Cup Final winner. The Boyd Exell/Bram Chardon duel has truly started. "This time it was Boyd's turn to win. Next time, it’ll be mine!" said the young Dutchman, with a smile.

Benjamin Aillaud represented France at the event, with four new horses. "I have gone back to my first love by assembling a new team of Lipizzan horses. The objective is to really make a mark in indoor driving with these horses," said the Frenchman, who was seventh in the event.

Part of the Longines Equita Lyon, Concours Hippique International for the second year in a row, four-horse indoor driving was once again a great success on the last day of the show. "We are very proud to host this discipline in Lyon. The audience is really starting to enjoy the discipline. I am really pleased that the best drivers in the world come to compete here;" said Sylvie Robert, President of GL events Equestrian Sport, before adding: "This year's Equita Lyon attracted a record number of visitors. All the people involved contributed to making this year's show a success."