Success with horses is all about partnership. Over a lifetime with horses, you try to get on with them all, but some are special, the ones you really form a connection with and they are not always the easiest horses in the barn. Sam Shaw did not have Glenlock Coco Chanel for a long time, but it was clear they had a great connection and their success was really only starting when fate intervened and as so often can happen, all our hopes and aspirations with horses are dashed. However, Coco certainly did not go unnoticed and this is her tribute.

Coco got a good start in life, but her inclusion in this feature is down to Sam (Pratt) Shaw. “I grew up on a cattle farm in Western Victoria” explains Sam. “My parents’ only involvement with horses was having shares in some racehorses, but my sister and I got our first horses when I was about seven. We would go trail riding with the neighbours and move the cattle about the property. When I was about eleven we started going around to the local rodeos. I liked the Western lifestyle and we had the cattle at home so I just got into it. As I got older we went further afield and it got more serious from there. I didn’t start really winning until I met my husband, Brad Shaw. He’s a third-generation cowboy from St Arnaud in Victoria. He put me on some good rodeo horses and taught me how to rope. It was Brad too that found Coco.”

Glenlock Coco Chanel was bred by Glen Trousdell from Blackbutt in Queensland. She was foaled in August 2006 and was by Spot of Grand (imp) a successful producer of Halter and Under Saddle horses, out of the Classy Priority (imp) mare, Actual Class. Whilst there is a good deal of Halter breeding so far, Coco’s maternal grand dam was Spin the Morn by the 1999 Australian Quarter Horse Hall of Fame inductee, Morn Deck. He had it all, type and talent with impressive cutting and racing bloodlines. Spin the Morn was out of the imported Miss Spin N Win that had plenty of performance blood as well. That Halter blood could be seen in Coco, as she was a National Two Year Old Halter Champion when shown by Trousdell before her performance talent came to the fore.

“Coco had a showing background before she was sold to Bec Knudsen (Frank Green’s daughter)” continues Sam. “Bec put the work into her and Coco was a First Division Barrel Racing Horse before I got her because she could and would run within a second of a winning time. She had been trained and had gone to Jackpot practice days and was running First Division times in the Jackpots. Bec rode her and also had some people working for her ride Coco. She was a good strong type and really suited to barrel racing because she could run, but had the strength to stop and turn. Her running horse breeding was obvious and I like a horse that can run and stop hard, like a roping horse. When you run up to a barrel you want to be able to sit down and turn without pulling on their mouth.

“I thought I could ride a horse, but Coco really brought me back down to earth. I really had to learn to ride her because she was so sensitive and responsive. I joined a gym to get strong and fit and build up my core strength so I could sit on her and stay balanced without interfering. I spent hours and hours just practising my hand position. Barrel racing is really just fast dressage.

“I got her in 2015 and in our first year of competition we did well enough to take out the Victorian Second Division Barrel Racing and All Round Cowgirl titles. We won those titles two years in a row. To win the All Round Cowgirl you have to get points in more than one event and I also got points in Breakaway Roping. It is like calf roping, but once you lasso the calf, you stop the horse and the rope is tied to the horn of the saddle by string and breaks as the calf runs off and time is taken when the string, with a small white flag attached, breaks away. That’s where the stop really counts. I occasionally do team roping and I am lucky that my husband is one of the best ‘heelers’ in the country, so if I can rope the head, he will generally get the other end.

“After 2017, we had earned enough money to graduate to Open competition. In 2018 we travelled the country and did 35 rodeos. We did well enough to win the Australian Professional Rodeo Association Barrel Racing and Over All Cowgirl Rookie of the Year awards. We won money all over the country at Mt Isa, the biggest rodeo in the country and Darwin etc. Most recently she won the barrel race at the Myrtleford (Vic) Golden Spurs Rodeo in December 2019, as well as winning a set of Golden Spurs for the All Round Cowgirl. I have them mounted on the wall. Not long after that everything was called off because of COVID-19.

“One Friday in mid-August, she was not quite right and did not want to eat and was listless. The vets came and after three days of is it, isn’t it colic we put her on the float and took her to the Morphettville Equine Clinic in Adelaide. They thought it was an impaction colic, but it turned out to be a really large bowel tumour. They did not find the tumour until they operated, as it had not shown up in x-rays or ultrasounds; it was hidden under the pelvis. The vets thought it could have been there for years, but had now grown to obstruct her bowel. It really broke my heart to think that she had been giving her all and winning at rodeos despite the giant tumour; she was amazing. She was put down on the 18th of August.

It was heartbreaking, as there seemed no reason why; she had always been a super healthy horse. Up until that day she was a bit off, she had no symptoms. She’s never had colic, was never ill. The only time she needed a vet was when she cut her leg on the fence.

“Coco was a typical redhead, very sassy and strong-willed. She had plenty of attitude and did not like being left alone. Everyone on the circuit knew Coco. We had a strong bond and I knew when to leave her alone and when to work her. We did not do much barrel racing training at home, mainly just fitness work. She really loved to travel and would load herself, never got sour on the road and wherever she was, she would always eat and drink. We were once on the road for six weeks and she loved it. She made herself at home wherever we were and she has seen as much of the country as I have.

“We weren’t really together for that long, but we won a fair bit. We were currently sitting ninth in the country in money earnings and we would have gone to the Nationals in Queensland in September, but they had been cancelled due to COVID. But the money I have won with Coco will carry over to next year’s rankings. I am currently looking for another horse, but I don’t think I will find anything as good as Coco.” 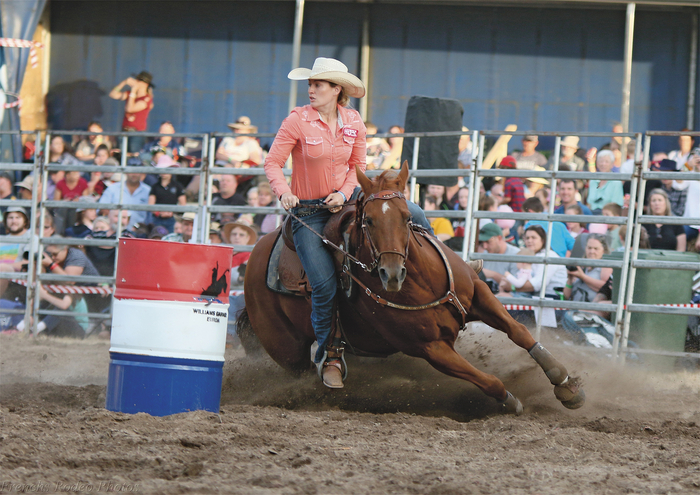