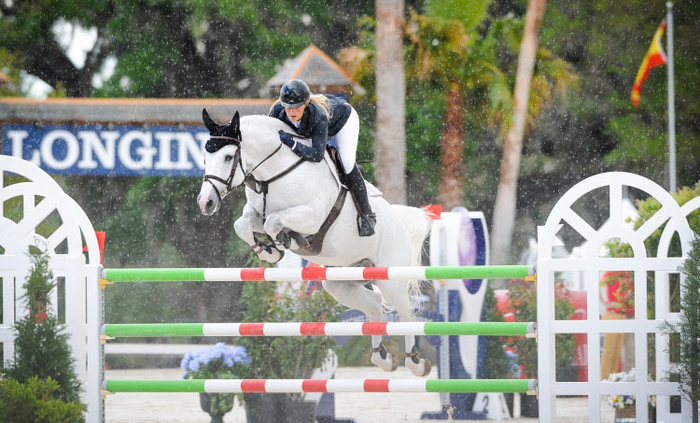 “It’s really very surreal for me right now,” said Vanderveen, 28. “I’ve always wanted to go to World Cup Finals, and this was a little bit of a last minute decision to come here and see if I could do something special today and get in.”
The stage was set at the beautiful Live Oak Plantation after just three riders managed to produce a clear first round over the course set by Kelvin Bywater (GBR). Vanderveen was dealt the disadvantageous position of having to go first in the jump-off, but she blazed an unbeatable time of 45.93 seconds, galloping full out to the final Longines oxer and getting across the ground swiftly with her horse’s large stride. Last to go, Beat Mändli (SUI) and Galan S made a valiant run at the winner but brought down two rails in the process. Brianne Goutal (USA) and Viva Colombia produced the only other double-clear performance to finish as runners-up with a time of 52.99 seconds.

“There were only 3 of us, so I figured I’d play it out fast as we could and see what happened,” Vanderveen explained. “He fired for me, and he shined for me in the jump-off. He’s a super fast horse.”
America’s Paris Lineup Takes Shape

As the final event of the North American League, Live Oak’s results solidified the American qualifiers for Paris. Vanderveen, with 41 total points for the season, sits sixth in the east coast sub league standings of the North American League and is the fifth-ranked U.S. rider. Eight U.S. riders, including defending World Cup Jumping Final Champion McLain Ward, qualify from this sub league. Devin Ryan finished 11th in Ocala with Eddie Blue, causing him to conclude the season as the third-ranked U.S. rider; he also plans to compete in Paris. West coast rider Jamie Barge (USA) and Luebbo journeyed east to assure themselves a Paris qualification. They are the third-ranked U.S. rider from the west coast sub league; three qualify for Paris.
Beat Mändli, winner of the Longines FEI World Cup™ Jumping Washington (USA), finished the season atop the east coast sub league standings with 53 points. Richard Spooner (USA), who won in Las Vegas (USA), was the best in the west, finishing with 60 points.

Kristen Vanderveen (USA) – 1st
“[This win is] really special. Frosty is the specific horse that I believed would be great in the World Cup Final setting. He can jump well for multiple days, he’s fast, and he’s particularly good in small rings and indoors.”

Brianne Goutal (USA) — 2nd
“I bought her for a student of mine, Cloe Hymowitz, a year ago. When Cloe went to study abroad this summer, I took over her horses to campaign a little, and I consequently fell in love with the horse. I told her parents that I’d love the opportunity to purchase her for myself, and they were kind enough to help me do that. I’m very grateful to have her. I don’t want to go as far as saying she’s the ‘next big thing,’ but I think she’s really special. She’s a great match for me and fits into my program very well.”

Beat Mändli (SUI) — 3rd
“Galan S is 12 years old now. We’ve had him [in the barn] for four years, and I started to ride him in the last six months, and he’s just a really nice horse. He tries his best every time, and he really stepped up in the last few weeks. I thought we’d give it a try here, and it worked out.”

Full standings can be viewed here

Full standings can be viewed here