Home > News & Stories > VR CLASSICS – All under one roof

VR CLASSICS – All under one roof

(Neumünster/ Germany) Tradition, charm and important sports event - these are all the treasures that have been offered by VR CLASSICS for many years. The 70th edition of the international horse show in the Neumünster Holstenhallen from February 13 – 16, 2020 will be no exception: The ninth stage of the FEI Dressage World Cup attracts many top athletes, and the newly added BEMER Riders Tour will further boost the reputation of the prestigious Volksbanken Raiffeisenbanken Grand Prix. The VR CLASSICS have grown and expanded, but the atmosphere is as welcoming and familiar as ever. After all, it is not only the great setting and the unique atmosphere that turn this traditional indoor riding tournament into one of the most popular events on the international tournament calendar.

"It has always been good and it is still good," emphasized Olympic silver medallist Peder Fredricson (Sweden) after having won the Volksbanken Raiffeisenbanken Grand Prix with Christian K. “Neumünster is simply amazing – all the fantastic horse people here, and everything is simply perfect for horses," enthused Willem Greve from the Netherlands last year. Isabell Werth from Rheinberg/North Rhine-Westphalia keeps on showing up in Neumünster, too. Since having won her first World Cup freestyle in Neumünster in 1998 with Amaretto, the world’s best dressage rider took the top honours in the FEI Dressage World Cup, Prize of VR Bank Neumünster, nine times in total – a Holstenhallen record.

With the inclusion of the BEMER Riders Tour this year, the overall budget rises to 1,050,000 Euros and the prize money to 305,000 Euros. Added to this will be three Land Rovers from the Tour rankings for the top three in this series with a total value of 200,000 Euros. The VR CLASSICS are the longest standing host of the FEI Dressage World Cup, offering four jumper competitions for the world show jumping rankings. Most of the points are awarded in the Volksbanken Raiffeisenbanken Grand Prix which has a "double" effect, so to speak - both for the world rankings and for the BEMER Riders Tour.

*Truly competitive – the field of participants *

Riders from almost all parts of the world join the equestrian festival in the Neumünster Holstenhallen. 13 different countries are represented – from Brazil to the Ukraine – and horse/rider duos compete in the FEI Dressage World Cup and in the CSI3* international show jumping competitions. 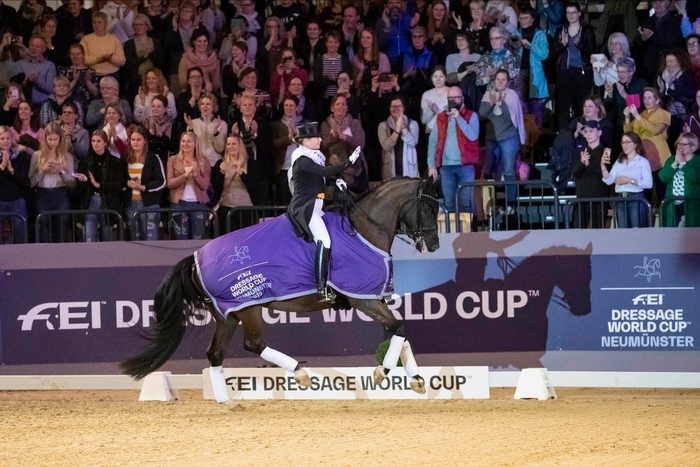 It’s no easy task to determine the favourites in the jumper classes at the VR CLASSICS. Christian Ahlmann (Marl), only just recently successful in the United Arab Emirates, is certainly one of the world's best riders competing in Neumünster. Julien Anquetin from France is less known here in Germany, but the Frenchman was already well ahead of famous riders. The German Champion Felix Haßmann from Lienen, former European Champion Marco Kutscher (Bad Essen), the Swedish rider Rolf-Göran Bengtsson and South Africa’s Alexa Stais, Finja Bormann from Königslutter, Gerrit Nieberg (Münster), Harm Lahde from Blender/Verden and the Dutch Willem Greve und Albert Zoer are also known for extraordinary sports qualities. Those who don’t feel competitive enough won’t make the drive to Neumünster.

Nisse Lüneburg (Hetlingen), the current no. 1 on the BEMER Riders Tour rankings with an 18-point lead on his competitors, is considered favourite in Neumünster. The BEMER Riders Tour will be truly challenging because so many excellent riders have announced to come. The points to be awarded in the Tour classification are particularly tight as well as there are many competitors striving for victory and placings in the Volksbank Raiffeisenbank Grand Prix.

The equestrian sports portal www.clipmyhorse.tv will broadcast show jumping and dressage tests, show competitions and indoor cross country from the Holstenhallen via livestream from Thursday, February 13 until Sunday, February 16, 2020. Simply click and watch.